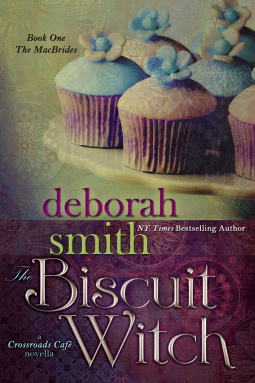 Disclaimer: I received this book free from NetGalley in exchange for an honest review. I did not receive any form of compensation.

Even though this book is the first in a series, it is actually a spin off of another novel by Deborah Smith.  So unfortunately all the characters and settings were introduced in that book.  Since this was a novella, Deborah Smith did not set up the characters and settings in such a way that someone who hadn’t read the book Crossroads Café could really get to know them.

However, the story was cute.  Sometimes a little too cute.  It did feel rushed and I don’t mean just because it was a novella and the author was trying to pack a whallop of a story into such a small space.  I mean in the fact that the two main characters move in together having known each other for an extremely short amount of time.  There really wasn’t any strife between the two main characters in order to help build their relationship.  Instead, everything was all wonderfully peaches and cream.  Well, except the little head accident.  But that felt more like it was another awwww how cute moment.

Having heard all the rave reviews about Crossroads Café, I was really hoping for more from this book.  I had so wanted to read that first book.  But now having read this, I am really conflicted.  The all rainbows and unicorns lovey-dovey isn’t my cup of tea.  I like to have characters that have a little more bite to them.