Beliefs and the world they have created 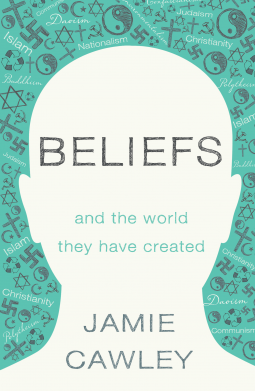 An accessible, objective understanding of what the major ‘beliefs’ are about.


The major beliefs include: Polytheism, Judaism, Daoism, Buddhism, Confucianism, Christianity, Islam, Nationalism, Communism and Environmentalism. All have over 100 million followers and the full structure of faith-determined behavioral guidance.

On every page of Beliefs, there is a quotable fact. Did you know that Socrates couldn’t read or write, or that Confucius did not believe in God or Gods? That the term ‘Capitalism’ was invented by Communists, and that according to the original Bible Hebrew, many Gods made the world? There is a rich tapestry of informative and entertaining information, from naming the first person to envisage God as we do now, to the fact that writing began as a legal and accounting tool, 2,000 years before it was used to tell stories.
Whether you want to know more about just one belief or about all of them, Beliefs presents ideologies and religions together, showing their links and answering frequently asked questions like: What is it that drives some believers to act in whatever way? What do religions say about homosexuality? Why did people become Communists? What is Buddhism? and so on.

Suitable for anyone looking for a quick grounding on the major beliefs, Beliefs is a fascinating read that will appeal to those interested in religion, current affairs, history and politics.

Having grown up in a very religiously open home, I was prompted to learn about various religions and make up my own mind about which one I chose to call my own.  That is one of the reasons why I have chosen Unitarian Universalism.  It allows and even promotes the study of all religions to help cultivate understanding amongst people.

This book helps to give a basic understanding of the major religions and what their belief systems entail.  It helps you to distinguish between the garbage that media & ignorance force feed us about religions that aren't Christianity and what is actually true.

It is only through knowing other religions can we truly come together as one complete global society.  This book helps as a stepping stone to promoting knowledge and understanding.

I loved all the little factoids that are sprinkled throughout the book as well.  It helps to dispel some of the illusion that has been created.

Disclaimer: I received this book free from NetGalley in exchange for an honest review. I did not receive any form of compensation.