I have had some wonderful breakthroughs on this branch of my family tree.  I pretty much obliterated a huge brick wall when it came to John Flynn.

Since I haven't posted any updates lately, let me catch you up to speed on this enormous brick wall that has been perplexing my family for several decades.

My maternal grandmother (Ann Flynn Pearson) was born 18 June 1908 to Mary Reynolds Flynn & John Flynn.  Growing up, she had heard that her dad had died.  She didn't know when or where.  So that is all she could tell my mom about him.

Ann Flynn Pearson passed away in 1965 before I was born.  So I never got the opportunity to meet her.  I had not even seen any pictures of her that I was aware of (but that is another story completely).

In the early 1990s, my mom & her sister paid a genealogist in Scotland to look into Ann's family.  This was a rather difficult process since the only thing they knew about Ann's parents were the Gaelic forms of their names.  They were known as Maisie & Ian Flynn to my mom and aunt.  In fact, my mom was named Maisie after her maternal grandmother.

This genealogist was only able to track down the real names of Ann's parents and where in Scotland they had lived.  It did include the names of their parents (Bridget Doherty Flynn, John Flynn, Mary Fitzpatrick Reynolds & Edward Reynolds) as it was listed on Mary & John's marriage records.  There wasn't much else known on them.

Finally, with the advent of online genealogy, I was able to start on the hunt.  However, I didn't have much information to work with.  I kept chipping away at various walls in my entire family tree.  However, the Flynn line remained hidden.

It wasn't until several years after my mom had passed away that I came across my great grandparents divorce records.  Mary Reynolds Flynn had filed for divorce in 1919.  I immediately sent away to Scotland to see if I could get copies of the records.  I was hoping that I would be able to find out any information from them.

Was I happily surprised!!!  Not only did the divorce papers provide information that John Flynn had moved to New York, but it listed his sister Ann Flynn Devitt and his brother Owen Flynn.  Chink!!!  A nice huge gap opened in the brick wall.

So I started searching records and became dismayed by all of the John Flynn's that came through Ellis Island.  However, after hours of searching through all the records, I found a John Flynn who was going to stay with his sister, Ms. Patrick Devitt.  So what are the chances?  As I looked through the passenger manifest for that ship, I found the log of immigrants who had to go into quarantine for a short period of time.  John Flynn was amongst those passengers.  In the quarantine record, it showed that his brother Owen Flynn had signed for his release.     Again, what are the coincidences that a John Flynn travelled from Scotland to New York and had a sister that was married to a Mr. Devitt and a brother named Owen?  It had to be the one.  Then I noticed one detail that clinched it for me.  On the page of the manifest that shows closest living relative it listed Mary Flynn as his wife & the address that they lived at in Scotland.  This was definitely him.

So now I knew where he went.  The sad part is that he moved to New York in 1909 when my grandmother was barely a year old.

Next hurdle was to figure out his birth date, where in Ireland he was born & his death date.

Again, I went back to the divorce records.  I noticed that it listed that his siblings (Ann & Owen) had written Mary in 1912 stating that John was deathly ill.  Mary attempted to write them back, but they never responded.  So she never knew what happened to them.

So I started looking for deaths in Manhattan, New York around 1912 & 1913.  I definitely had no luck at all.  It wasn't until recently that I finally widened my search.  I found it.  He died 9 December 1919 of wood alcohol poisoning.  I have no clue what caused his siblings to write to Mary saying he was ill previously.  Maybe he actually was.  I will probably never know.

Now I had another brick taken out of the wall.

Then I stumbled upon Ann Flynn Devitt & Patrick Devitt in someone else's family tree.  She had Ann as being born in Drumkeeran, Ireland.  I sent a message to this person to find out how she knew this.  She said that the family story went that Ann Devitt had gone back to Ireland while she was pregnant with one of her sons and she gave birth to him in her home town.  That son was born in Drumkeeran, Ireland.

With this information, I started digging in Drumkeeran records.  I found the birth of a Peter Flynn to Bridget Doherty Flynn & John Flynn.  So now I found out that there is another sibling.

Julia M. Schultz is another mystery that needs to be solved, but that one is for another day. 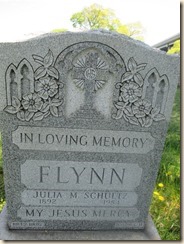