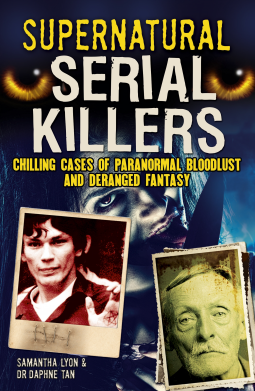 Albert Fish held the genuine belief that the murders he committed were upon instruction from God. Peter Stumpp, who started practicing the "wicked arts from twelve years of age", was convinced he was a werewolf. There are many more murderous individuals like them. Supernatural Serial Killers explores the association between serial killers and the supernatural. The crimes committed by these men and women usually involved sexual deviance, cannibalism and violence toward children. In sixteenth century Europe, the problem became so significant that 'Werewolf Witch Trials' were conducted - many have no idea that it was possible to be tried and convicted for the crime of being a Werewolf, but Lycanthropy was a serious and major social concern in the 1500s. In this book, approximately twenty supernatural serial killers are discussed, including their background, crimes, trials and defenses.

This book was received free from Netgalley in exchange for an honest review.
I have done something a little different this time around.  Instead of doing a regular post, I have decided to create a video review.  Hopefully, you will like it.  I find that I can do the video reviews much more quickly then doing a written review.  So I might be able to catch up on getting my reviews done and get them out quicker.
Let me know what you think of the video.