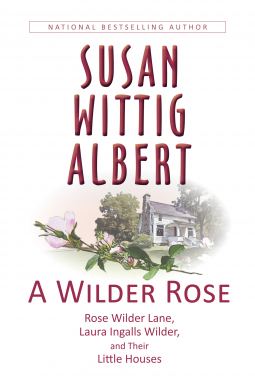 Disclaimer:  I received this book free from Persevero Press in exchange for an honest review.  I did not receive any form of compensation.

I have to admit that I was never one to really like the Little House on the Prairie TV show.  However, I saw Susan Wittig Albert's name on the cover and just had to get this book.  I love her China Bayle series.  I sort of didn't look and see the small print under the title saying this was about Laura Ingalls Wilder and Little House on the Prairie.

That being said, I actually enjoyed this book immensely.  I love being able to take a look at real historical people through a fictional lens.  There is no way to know exactly what was said or happened, hence this book being labelled as fiction.  However, Susan did extensive research including reading through the diaries of Laura Ingalls Wilder and her daughter Rose Wilder Lane.  It was through events that unfurled in the diary that Susan was able to flesh out a story of what happened back then.

I am glad that Rose Wilder Lane is finally able to receive credit for helping her mother write the Little House on the Prairie stories.  I know that it is common practice that ghost writers aren't acknowledged, but I honestly feel that they should.

Not only do we see how they cowrote the Little House series together, but how their relationship played a huge role in their lives.
books netgalley review